Calibrating Your Device: 5 Advantages of Opting for the 3-point User-Calibration Mechanism 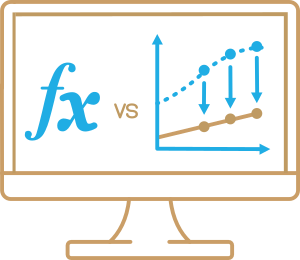 The math channels available in our visualization and logging software allow you to implement formulas involving the various channels of Dracal USB sensors. In particular, the implementation of functions "equivalent" to a calibration can be implemented manually and be accessible in the graphing and logging tab. Why would you then choose a device (-CAL) that supports the 3-point user calibration mechanism?

1. Calibration points are stored directly on the device

Although the formulas implemented in the math channels are stored and accessible by a user between each of their sessions using DracalView, these remain specific to the local version of the software and not to the device itself. When a device is shared between two users who each have their own version of our tools, the formulas implemented in the mathematics channels (in this case calibration formulas) are not transferred from one user to another.

However, when efforts are invested to determine calibration points for a sensor, it is generally desirable that these points follow the device and can be accessed by anyone using it in the future.

2. Independence of the calibration unit used

Math channels apply a formula to the direct "output" of a channel, without any consistency checks for units. For example, a formula implemented to calibrate a temperature channel in Celsius will, in the best case, have to be rewritten if a new user wants to read in Kelvin. In the worst case, a new user in a hurry will not have thought that the formula should be rewritten and could lose valuable effort by the time he realizes his oversight.

The 3-point calibration mechanism does automatic conversion of entered values when changing units and always calibrates with the points converted to the correct units.

3. The calibration is effective on the virtual channels

Virtual channels are, by definition, channels whose values are the result of calculations combining one or more other real channels from the same sensor. Dew point, heat index, height calculation based on pressure measurement are all examples of virtual channels returned by some Dracal devices.

A user who wishes to implement his own calibration formulas via mathematical channels must realize that the associated virtual channels will also have to be calibrated accordingly or else no longer be used.

Calibrating real channels via the mechanism provided for this purpose bypasses all these drawbacks since the virtual channels calculated from calibrated real channels take the "new" value from them (unless you have disabled the points, of course).

For users thinking of eventually integrating the data stream generated by their devices into their own systems, it is worth thinking about the fact that only the real and virtual channels of our devices are accessible via our command line integration tool dracal-usb-get, and not the math channels that live only at the graphical software level.

As for the calibrated (as well as non-calibrated) values of all channels for which there are calibration points recorded in the device, they are accessible at all times in all tools, including our data integration tools.

If you want to have your devices calibrated by an external resource, using math channels is not necessarily the easiest way to get the job accomplished, especially if the calibration is to be done in 2 or 3 points. The risk of errors is greater, and the formulas more complex to implement.

The 3-point calibration mechanism has been designed to be as intuitive as possible, requiring only the input of points without worrying about any formulas.

That being said, math channels are a tool at your disposal and a solution that truly exists to implement calibration formulas of your own. You just need to be aware of the constraints of such an implementation and determine whether or not it is limiting for your application and needs.